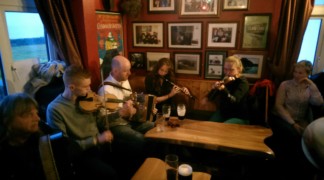 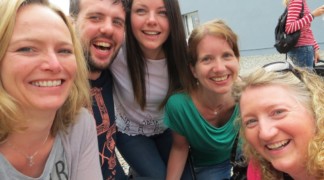 The really unique thing about Craiceann is that it is not just a school where participants will improve their bodhrán playing, it is actually a wonderful life experience, because of the special “spirit” that is generated during the week.

This indefinable “Spirit of Craiceann” is difficult to explain, but is has to do with a combination of things. If you have ever spent time on a small island anywhere you will understand that islands have an almost magical quality, and this is certainly so for Inis Oirr. This is a combination of the people and their traditions, together with the island’s location, and its landscape, and its history. During Craiceann each year, the place almost becomes a musical and bodhrán island, the summerschool becomes the focus for both residents and visitors, and this creates a vibrant and friendly atmosphere. The eclectic mixture of students of all ages and backgrounds from different countries creates a very stimulating environment, and their interaction with each other, and the tutors, both at classes and evening music sessions makes for easy learning and shared enjoyment. Many people return year after year to participate in Craiceann, and friendships are forged there that will last forever. There is a feeling of being part of the Craiceann family, and many people plan their annual vacations to include the Craiceann week, and look on it as a sort of homecoming when they arrive back on Inis Oirr.

Laurence Doherty, who came to Craiceann 2013 and returned ever since, wrote this lovely poem:

The early morning sun pinks limestone on
north Clare and westward reels and jigs
over the silvering seas to golden Inis Oirr.

Here, the planished waters on Atlantic swell
softly rock the ferries at the pier;
a lone yacht put-puts out into the blue.

Each year in June, this gentle isle is home
to Irish drum admirers near and far, from
Michigan to Moscow, Alkmaar to the land of Oz.

There’s a strange and childish comfort being back
in daily ‘school’, ushered to our rooms for class,
where the down-up-down of tipper strokes,

in time- rhythms on taut skins, glide
and scrape to smiles and friendly laughter,
amid rough circles of a shared delight.

At evening, music bubbles up again,
and, like the Guinness, overflows into
the wee small hours: spills from Ruairi’s;

flows on the twilight air to the Ostan;
laps in the door of welcoming Tigh Ned’s;
and may be scooped up gently by a legend,

virtuoso drawn here like some tide,
and hammered into melodies so strong
that none can stay the tapping of the foot.

Approaching week’s end all will sit, entranced,
as Micheal pipes a slow air on tin whistle,
siren sounds to lure us back – the haunting ‘Inisheer’.

(For the islanders of Inis Oirr)

‘Mid Galway Bay’s Atlantic foam, there lies a place that calls to me,

Another special island home that soothes my heart its shores to see.

From on the waves the signal tower is a beacon, guides us straight.

I know I’ll stand within the hour upon the quayside, Heaven’s gate.

To know the welcome is such pleasure and gear the pace of life to slow,

Their treasured greetings are the measure of this gem I’ve come to know.

And though no rosy paradise, nor Celtic Eden, that is clear,

But just to be here will suffice on this dear isle of Inis Oirr.

My mind’s eye takes me on a trip to visualise afresh, take stock,

I’ll gaze and wonder at the old ship’s rusting bones upon the rocks,

Reminder of that storm lashed night when on the Crag the Plassey* ran,

And islanders with steely might and Breeches buoy saved every man.

That’s Inis Maan hunched over there, across Foula sound and the white gull’s cries.

A line of upturned currachs landed by the silver sanded shore,

Like some finless dolphins stranded, yearning for the sea once more.

Sunk in windswept sand and grass, beside the plot where rests the dead,

Lies Caomhain’s church where first the Mass long centuries ago was said.

Before the steep walk up to where O’Brien’s tower stands starkly grey.

Against the havoc Cromwell wreaked as henchmen fouled the earth with blood.

In spite of untold wasted lives, or freedoms that had been denied,

It’s here the language still survives in testament to those who died.

I’ll stroll the roads down to the light, past sturdy growing calves, afield,

Observe the swallows swiftly arrow down the lanes then hear the lark.

The wren, the blackbird and the sparrow flit through tangled hedges dark.

The jigsaw fields and lanes can tell of holy sites of saints gone by,

There’s music in the rooms below where native crafts are practiced yet.

And all caressed by waves unfurled where sparkling pearls of sunlight spray,

Conspire to render this a world that’s conjured up from far away.

Out west across the surging blue, beyond the clear horizon still,

That land that tendered hope anew, beyond the fabled Hy Brasil.

*Beanna Beola:  The Twelve Bens or Pins – a mountain range in Connemara

Craiceann is now the new Christmas,

The days we will count when departing,

Till we all return here because,

Of our year this is the real highlight,

A week-long grand rave in Junetide

That beats that big bash in December,

And makes us all cosy inside.

We don’t decorate here with tinsel,

But do it with music in style,

We’ll hang the tunes up on the airwaves,

And drape our songs right round the isle.

The yule log’s best left in the tin.

And cranberry sauce is a no-no,

Best scrape it all into the bin.

Cavorting in the arctic sky,

Better by far than a Christmas tree star

Or the best fairy lights you can buy.

Christmas is a bit over-rated,

But Craiceann here stands head and shoulders above,

And there’s more festive fun to be had.

Although we can still enjoy Christmas,

The half-way point up to next Craiceann,

That flashing light in winter’s dark.

It’s then that grown-ups go all silly,

And start thinking how many sleeps

Until it’s time for the next Craiceann,

And some even need to count sheeps!

I hope that there’s nothing I’ve missed,